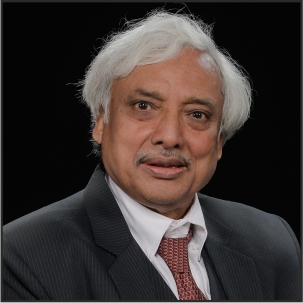 Dr. Sharif Ahmad, as Pro-Vice-Chancellor (Research & Consultancy) SGT University, Gurugram, NCR-Delhi, INDIA, is a Superannuated Professor of Materials Chemistry, did his Masters (1976) and Doctoral (1981) in Chemistry from AMU, Aligarh. In recognition of his work, He was nominated as a member of the prestigious American Chemical Society for three years (2015 -2018) and had a membership of Royal Chemical Society, UK.

Prof. Ahmad has been actively engaged in teaching & research in the frontier areas of Materials Chemistry for the last 40 years. He has made path-breaking contributions, particularly in vegetable oil-based sustainable, biodegradable polymers, Conducting Polymers, Hydrogels, Hyperbranched Polymers, Polymer-based anti-corrosive coating materials, organic/inorganic nanomaterials, etc. To his credit, Prof. Ahmad has more than 238 research papers, four (04) books, and 23 book chapters published in prestigious journals and books with Google Scholar Citations of 9325, h-index 53, and i10-index 172 (till 28th October 2021). He has guided 31 Ph.D. students for their doctoral work in his laboratory at JMI, New Delhi. Currently, he is guiding 04 scholars as a co-supervisor. He has contributed his work to 51 National and 52 International Conferences. He is a pioneer in designing, developing, and initiating a PG course in Materials Chemistry in 1985 when the said branch was even not formally recognized across the globe. He has been instrumental in starting the two years Unani Pharmacy Course along with the Ph.D. program in Unani Medicine. Further, in order to attract bright faculty (Foreign/National Fellows), a “Multidisciplinary Centre for Advanced Research and Studies” was also developed at JMI, New Delhi, during the tenure of his deanship.

Prof. Ahmad attracted a research grant worth Rs. 1.32 Crore, i.e., Rs. 68 Lakh from various R&D agencies, like DRDO (ARDB-NRB), Nuclear Science Center, CSIR, and UGC. He has successfully executed and completed these sponsored research projects. Currently, as Co-P.I. running a DBT project of more than Rs. 64 Lakh. Prof. Ahmad has been regularly served as the subject expert in national committees of prestigious academic bodies of various institutions and universities (e.g., IIT, Delhi, NIT Srinagar & Allahabad, BHU, DU, AMU). Besides, he is also a Ph.D. examiner of these universities and acted as a subject expert in interviews at CSIR, UPSC, and Uttarakhand PSC. Prof. Ahmad has long administrative experience and remains actively engaged in university administration and various national academic committees. He has been the Head, Department of Chemistry, JMI, New Delhi (2009-12); Dean, Faculty of Natural Sciences (2015-18), JMI, New Delhi; acted as Superintendent for UG/PG examinations and entrance tests for different courses at JMI. He has also performed the job of Deputy Proctor (2002-05), Assistant Proctor (2001-02), Tabulator of UG/PG Examinations (2002, 2004). He has been nominated as a member of the Board of Studies of many Departments, Faculty Committees, Academic Council, Executive Council, Council of Court, and Finance Committee in JMI and other universities.

His pioneering studies led to the development of volatile organic compounds-free green bio gradable low molecular weight polymers/oligomers from vegetable seeds, which are still underutilized. The vegetable seed oil has wider applications in non-conventional biodiesel and polymer industries. His work on oil-based polyester amides, epoxy, polyurethane, alkyds has potential scope in industries. Prof. Ahmad has also developed various oil-based polyols and has developed oleo-polyol techniques for the synthesis of metallic, bimetallic, and trimetallic nano-magnetic ferrites, which have significant applications in the field of anti-corrosive coatings, EMI shielding, water treatment, and hydrogels pertaining to drug delivery, and green polymer industry. Furthermore, waterborne alkyds/polyesters are being developed and studied as high-performance anti-corrosive coating materials.